Project Management was an application build as part of the JVM Programming Languages course at University. The aim was to introduce us to programming languages designed to run on the JVM and encourage remote group collaboration during the Coronavirus lockdown. 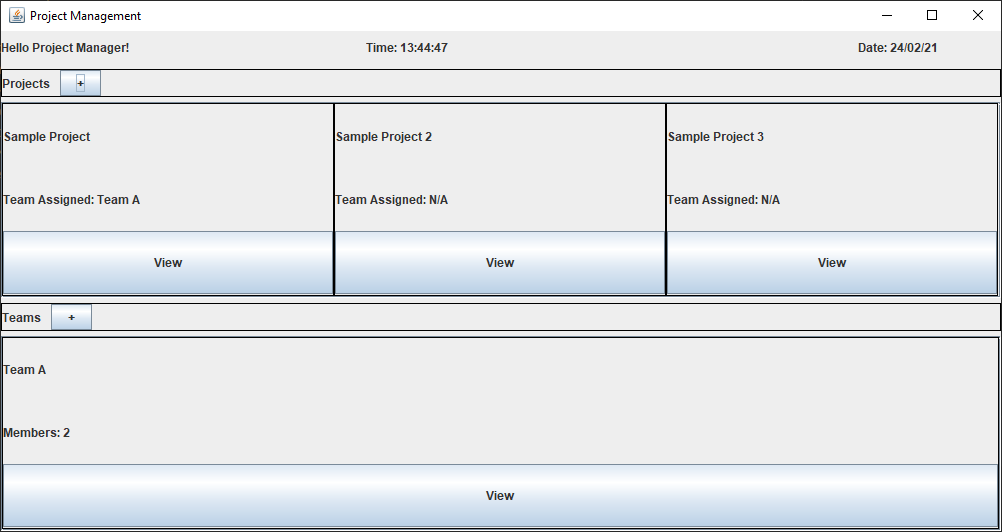 The requirements were as follows:

As the member of the team with the most programming experience, I was selected as the lead developer. Responsibilities included:

With responsibilities shared among us, I began setting up a project to support Java, Kotlin and Scala. To make setting up easier for my peers, I used Maven as the dependency manager.

My task was to produce the critical path finding algorithm in Kotlin and Scala. For the former, an object-oriented approach was used, with the process similar to the one described in this video. The main reason for choosing this implementation is the extra information that it produces: the output of this algorithm can tell which tasks are in the critical path, which tasks can be delayed without affecting the project, and the expected duration of the entire project. 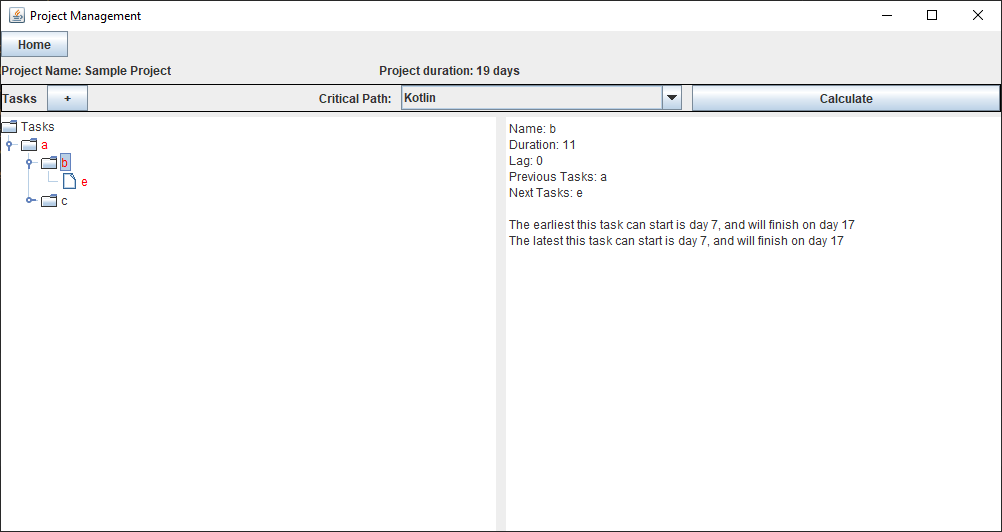 This function is then called from the findCriticalPath method implemented by my colleague Harvind, where he finds the path from the starting task to the end task which contain all the critical paths.

Next, I worked on the Scala implementation. I decided to follow a pure functional approach, with no side effects, meaning I had to use recursion to avoid for and while loops. The logic took many attempts to get the correct results, this is mainly due to my inexperience with recursion. However, this process helped me developing a better understanding of recursive problems, and I feel more confident now.

Because of the single-threaded nature of this program, no additional issues would arise with such an implementation, however moving to a multi-threaded approach could cause race issues when multiple threads try to access or update the variable at the same time.

Overall, the algorithm works successfully and is capable of identifying a critical path correctly. During testing I found some issues, which I was able to debug and fix. Perhaps the Scala implementation could be optimized as detailed in the previous paragraph.

In regards to the coursework as a whole, most features work correctly and do have unit tests to ensure nothing breaks when refactoring or adding code. The only exceptions are persistence and the GUI. Regarding persistence, the lack of tests meant we weren’t aware of a minor bug in the code until functionality was implemented into the GUI. More specifically, when creating a new team through the interface, the JSON file would not update automatically. Upon further inspection I found out that the “save()” method was not called when creating a new team object.

On the upside, the persistence logic has been abstracted away from other parts of the program, by automatically updating the JSON file whenever a Project or Team object is instantiated and updated. This meant that other members of the group who weren’t working on persistence would not have to worry about when and how to update persistence (for example, Ed worked on the GUI but not on persistence), this was all taken care of in the background.

The GUI was built using the form editor by my colleague Ed; however, the code is quite messy, and does not adhere to the proper naming conventions expected in Java. For instance, most variables begin with an uppercase letter, something that is generally reserved for classes. Additionally, the code is not properly commented, and it’s sometimes hard to identify what a block of code does and what’s the logic behind it. This caused an issue when launching the interface for the first time, when a “data.json” is empty or does not exists. It would cause a null pointer exception, but due to us using IntelliJ’s form editor, the error was vague and would simply point to the first line of the file. After some debugging I found out that a panel was created inside a loop that iterated based on the contents of “data.json”, however when it’s empty/does not exists, the panel would not be created, essentially adding a null panel to the interface. The fix was to move the panel creation outside the loop.

A further issue with the GUI was that error messages would not be displayed. For example, adding a duplicated member to a team would throw an exception, but the GUI would just close the dialog without displaying useful messages. Following the demonstration, we added try/catch statements to catch errors and display relevant error messages to the user. This was mostly a painless process since, when throwing exceptions, we also defined custom error messages, so a simple dialog that prints the exception’s message was enough to solve this issue.

Due to the pandemic, we thought it was a good idea to use the git versioning system and host the code on GitHub to allow for easier collaboration and code sharing. Each of us had their own branch, working on a particular aspect of the project, and later we would merge the code into the master branch to combine everyone’s code. I have previous experience with git, so I’m familiar with the concept of committing code regularly with clear, concise commit messages.

However, my colleagues had little to no experience with this, so sometimes they would include multiple changes across a number of files in a single commit. This is something that could be improved in future projects and would be of great benefit in the workplace when working on a large codebase with dedicated members checking merge requests.

Additionally, my previous experiences with Git were limited to individual projects. Through this coursework, I learnt how to collaborate with others, how to fix any code conflicts, how to create pull requests for review by other members, and how to merge all our branches into a single “master” branch.

Generally speaking, version control did work successfully, and we were able to work on this project remotely, as a group, very well.